Chris Fowler has some advice for any Riviera owners keen to capture aerial shots of their prized possession at sea – just do it.

“Some people are daunted by technology but I’d encourage anyone to have a go,” said Chris, who has won this month’s Riviera and Belize Photo and Video Competition after using a Phantom drone to capture stunning footage of his M340 Sports Cruiser – Valkyrie – cruising home from Tangalooma Island near Brisbane.

“I hadn’t used my drone for a while and it was looking like a good day so I thought I’d take it out and try to get a few shots while my cousin was driving.

“They are relatively easy to operate and the image quality is just getting better and better. I then used Windows Movie Maker to edit the footage and overlay the music.

“It certainly gives you a different impression of your Riviera. Driving from the helm is one thing but when you see it moving through the water, well, that’s a completely different story.”

Chris and wife Renee, who have two youngsters, upgraded from a M370 Sports Cruiser late last year and are already planning their next shoot – once he gets new propellers for his drone.

“I have to admit I almost put it in the drink,” Chris laughed. “I had a couple of issues bringing it back in and it lost its propellers when it hit the stern rails.

“Now I just need to get some replacement blades so I can get an even better video.”

Thanks also for these recent entries… 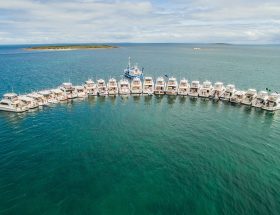