Riviera looks back over the year 2020

It was a year of achievements in 2020 for the Riviera team as the company marked 40 years of boatbuilding evolution.

While the challenges were evident throughout the year, global demand for Riviera accelerated from June as the company received forward orders that were the best in 40 years.

This represented a milestone achievement for Riviera, an exceptional performance for Australia’s largest luxury boatbuilder that showcased the enduring popularity of Riviera’s range of motor yachts from 39 to 72 feet, praised the world over for their sea-keeping qualities, advanced engineering and luxurious interior finishes.

Riviera owner Rodney Longhurst paid tribute to the company’s team for their drive and dedication throughout the year.

“I would like to heartily congratulate our team for the achievements of our skilled boatbuilders, engineers and designers, sales, marketing and administration teams providing strong support to our dealer representatives across Australia, New Zealand, the Americas, Europe and Asia,” said Mr Longhurst.

“With safety protocols in place since March, we were fortunate to be able to continue building motor yachts for delivery to new owners around the world and continue to support our owners.

“Our team’s focus is to create the best boating experience possible, and it’s gratifying to hear so many Riviera motor yacht owners who credit the Rivieras of today as the best we’ve ever created.”

Record start to the year

The year began with the Riviera family in New Zealand setting a new record for the largest Riviera raft-up ever staged. One hundred and six Riviera motor yachts gathered on Awaawaroa Bay on the southern side of Waiheke Island to create a massive circle measuring 234m in diameter. The mammoth gathering beat the previous record of 48 Riviera motor yachts set in Western Australia in 2017.

There may have been limited scope for social events during the remainder of the year, but the Riviera family made the most of opportunities as they arose while still adhering to the advice of health and maritime authorities.

The Port Lincoln Tuna Classic, held off the Eyre Peninsula in South Australia, led the way in March celebrating 14 years of this exciting catch-and-release fishing event enjoyed by many Riviera motor yacht owners.

This was followed by the annual Port Lincoln Experience hosted by R Marine SA, where 120 friends and family aboard 33 Riviera motor yachts were joined by Riviera owner Rodney Longhurst to enjoy a sumptuous long weekend.

Our biggest intake of apprentices

Riviera welcomed 33 new apprentices in 2020, growing this talented group of future master boatbuilders to more than 80.

Almost 30 years since introducing its apprenticeship program, more than 300 Riviera apprentices have become qualified tradespeople and are now working across industry sectors around the world.

The 505 SUV premiered at the Miami Yacht Show in February. The sporty and adventurous yacht boasts a three-stateroom/two-bathroom layout with full-beam master stateroom, along with a superb raised and fully covered alfresco deck that redefines luxury and privacy for the popular SUV collection.

The premiere of the 64 Sports Motor Yacht followed in June. The 64 was completed during the height of the COVID-19 restrictions, a testament to the dedication of the Riviera team.
The 64 features four staterooms including a full-beam master, plus a large utility room or optional crew cabin, three bathrooms, a large covered alfresco deck, sporting cockpit, a superbly appointed and expansive four-sided enclosed flybridge, and a versatile foredeck with plenty of room to either relax and entertain in comfort or to accommodate a large tender.

In August, the 64 SMY embarked on a world tour that included the east coast of Australia, New Zealand and then the United States where she made her world boat show premiere at Fort Lauderdale.

The 50 SMY stands proudly alongside her sisterships, the 72, 68 and 64 Sports Motor Yachts, a new collection of yachts that are in a league of their own. Riviera has created a spacious motor yacht with extensive water sports capabilities and a design for extended coastal passages or weekend escapes offering a three-stateroom, two-bathroom layout. She can easily serve as a luxurious family, entertainer or adventure yacht.

The latest expression of Riviera’s flagship 72 Sports Motor Yacht had her world premiere at the Fort Lauderdale International Boat Show in October.

The newest 72 Sports Motor Yacht introduces a suite of refinements that heighten her voyaging capabilities and owner enjoyment. The 72 SMY offers greater range and speed, and the benefits of enhanced guest and crew accommodation consisting of four staterooms, three bathrooms and a utility room for additional accommodation or storage.

These are complemented by a large alfresco deck, foredeck entertainment zone and flybridge ‘sky lounge’ with separate deck.

The next generation of the popular Belize 54 Daybridge also premiered at Fort Lauderdale in October. The latest refinements offered in this European-inspired motor yacht include an impressive new flybridge and hardtop design, greater speed and enhanced owner comforts consisting of a new helm design, greater seating and useable deck space, as well as refinements to the laundry and galley.

Milestones for the 5400 and 6000 Sport Yacht Platinum Edition

Riviera’s constant refinement led to the release in 2019 of the 6000, 5400 and 4800 Platinum Edition series which added a new level of elegance and luxury for the Sport Yacht range.

In calendar year 2020, Riviera has welcomed 92 new owners to the company’s exclusive global family. To meet this popularity, the company embarked on the first stage of a $10 million expansion of its Gold Coast factory by extending the existing facility, preparing for construction of new buildings, and the implementation of new technology and equipment.

Riviera was named Exporter of the Year for 2020 in the annual Australian International Marine Export Group (AIMEX) awards held on the Gold Coast in November. The award recognises the global popularity of Riviera’s world-class motor yachts.

More than half of the motor yachts built by Riviera each year are exported from Australia to the Americas, Europe, Asia and New Zealand.

Planning for a strong future

Riviera is currently developing further new model releases that will herald a new era of motor yacht design for the company.

“After 40 years and launching more than 5,650 motor yachts, the Rivieras of today are the best yachts we have ever created, and this inspires our team to build different and better yachts every day,” said Mr Longhurst.

“The plans we are implementing now are preparing Riviera for an even stronger future.

“Through the dedication of our team of over 600 exceptional craftsmen and women, our motor yachts today offer superior design, technology, performance and comfort that allows us to equally compete with the best in the world.

“After 40 years of evolution, we continue refining and advancing our craft. We are looking forward to the year ahead with the cautious optimism of our times, and grateful for the achievements of this past year.”

A record-breaking Riviera raft-up in New Zealand provided a weekend of fun and entertainment for the Riviera family.

Riviera accepted a record intake of apprentices in 2020, growing this talented group of future master boatbuilders to more than 80. The sporty, adventurous and luxuriously appointed Riviera 505 SUV was launched at the Miami Yacht Show. 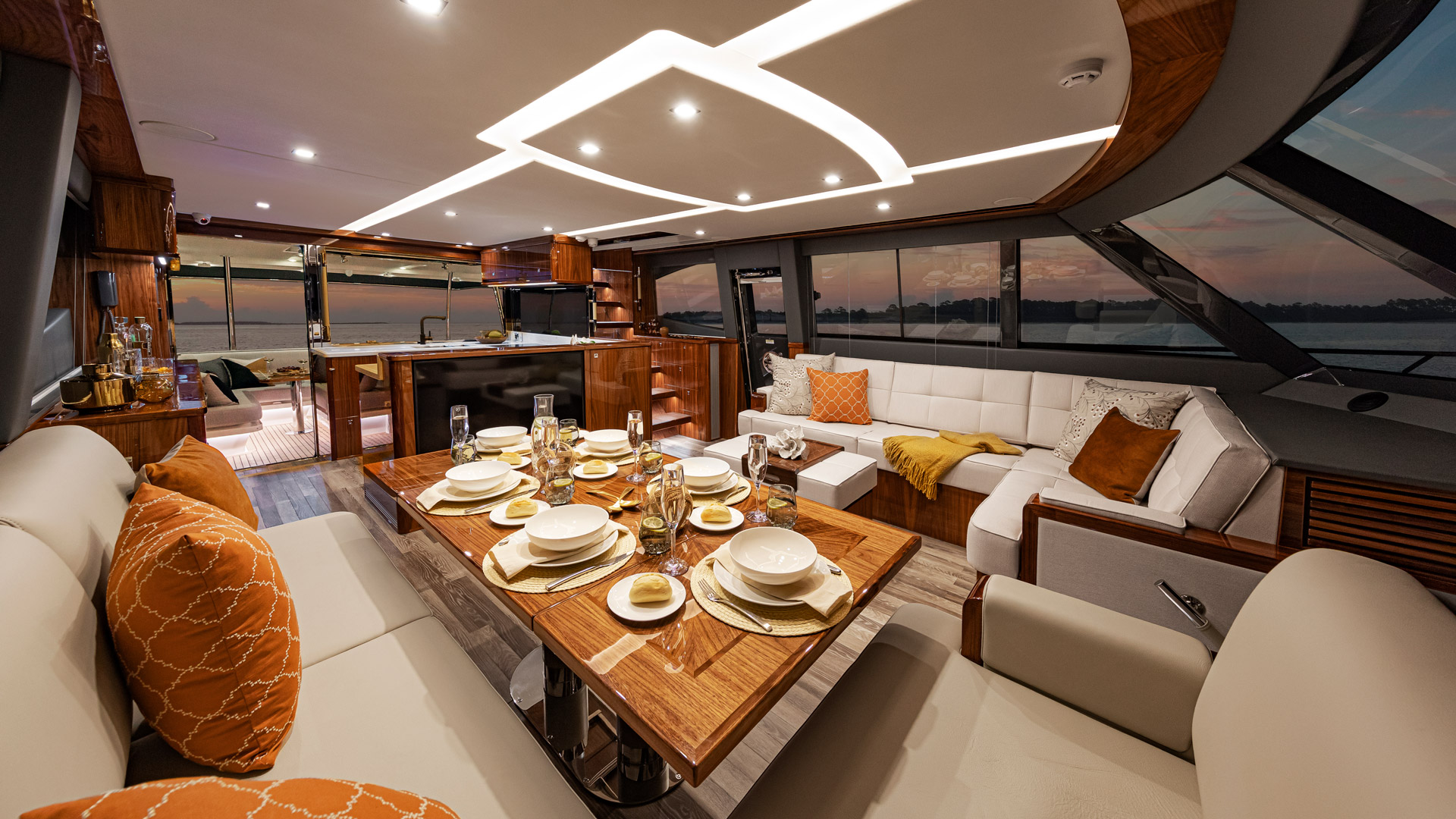 The new expression of the 72 Sports Motor Yacht introduced a suite of refinements to heighten her voyaging capabilities and owner enjoyment.

The next generation of the popular Belize 54 Daybridge offers an impressive new design, greater speed and enhanced owner comforts.

Riviera was named Large Exporter of the Year for 2020 in the annual Australian International Marine Export Group (AIMEX) awards.