Being at the forefront of premium yacht manufacturing means using the best and most appropriate equipment and systems. For the ultimate boating experience, Riviera’s team of engineers select the latest battery technology: the lithium marine battery.

Riviera owners often liken their yachts to floating luxury apartments: exquisitely appointed, spacious and with all of the conveniences and amenities found in a modern home. However, living on the water as if on land requires careful regard for power supply and storage. It is for this reason that Riviera now includes lithium batteries as standard on yachts 54 feet and larger, with it being an option for owners with yachts under 50 feet.

Lithium batteries are undoubtedly superior for their depth of discharge, speed of charge, weight, and life cycle when compared to a more traditional lead acid or absorbed glass mat (AGM) batteries. While the initial investment of lithium may be higher, it’s these benefits that significantly lower the cost of lithium batteries over their service life. The lithium batteries used by Riviera are the most stable and safest type: Lithium Iron Phosphate (LiFePO4). Each battery also has a built-in Battery Management System (BMS). This proprietary internal component will disconnect the battery in an event that will harm the battery, including over-discharge and over-voltage. It also monitors each individual cell to ensure even charging and discharging for maximising battery life.

One of the major features of the technology is the greater depth of discharge a lithium battery offers. Depth of discharge is the percentage of the capacity which has been removed from a fully charged battery. This is the most important consideration for maintaining battery health.

Lithium has a depth of discharge between 70 per cent to 80 per cent, depending on the manufacturer’s specifications. Depleting an AGM battery below 50 per cent, on the other hand, causes permanent damage. It impacts the life of the battery and its memory or ability to be recharged back to 100 per cent.

Lithium therefore offers many more usable amp hours than an AGM before requiring to be recharged. Even with an AGM battery bank of 200 amp hours, only 100 amp hours are actually usable, versus a comparable lithium battery bank providing 140-160 amp hours. When it comes time to charge a battery, recharging a lithium battery to 100 per cent can be up to 75 per cent faster than the comparative AGM battery.

With a greater depth of discharge and a quick recharge, lithium batteries can reduce the amount of generator hours needed to keep a yacht powered. In saying that, for every hour spent on anchor, its suggested one hour is needed on the generator on average, therefore 12 hours in a 24-hour period. This will assist in maximising overall battery condition and life.

Lithium batteries are around 60 per cent lighter than their AGM equivalents. And every owner knows what this means – a lighter boat performs better and is more efficient. Despite being lighter and smaller, their life expectancy is three to four times longer than an AGM. A top-of-the-line lithium marine battery has a life expectancy of five to eight years.

As discussed, the most important consideration for battery care is not exceeding a battery’s depth of discharge. A battery’s total capacity and its usable capacity are different, and this must be understood to have a realistic expectation of the system and to use it accordingly.

Depending on a manufacturer’s specifications, a lithium marine battery should not be depleted below 70 per cent to 80 per cent capacity, while an AGM battery should never be depleted to below 50 per cent capacity. Depleting a battery beyond this will reduce the overall life of the battery bank.
The next most important factor in battery care is ensuring the system is recharged right back to 100 per cent. Batteries generate memory and will automatically reduce what their full capacity is if they have not been fully recharged. Recharging back to 100 per cent avoids sulphation and premature battery failure.

A good habit to get into is having the battery system at 100 per cent before retiring for the evening. The first thing people do in the morning is boil the kettle for a cup of tea, which uses the inverter and places a large load on the batteries.

It is timely now to discuss inverters and the load they demand from a battery system. While conveniently providing 240-volt power for the appliances we get used to using at home, inverters are the leading cause of killing battery banks. Let’s use an 1800-watt kettle as an example. This will consume approximately 7.5 amps at 240 volts, but when running through an inverter connected to the batteries, the kettle will consume 75 amps at 24 volts or 150 amps at 12 volts, plus an additional 10% due to inefficiencies. Given these consumptions you can now appreciate how this can damage an already depleted battery bank. With a little bit of understanding and good battery management, you can relax and enjoy fully all the Riviera luxuries and conveniences while on the water. 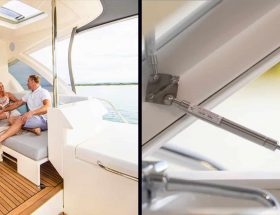 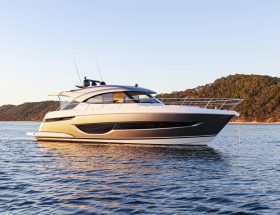 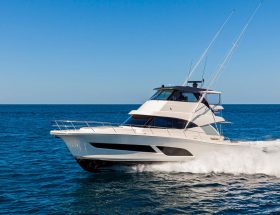 There’s an awful lot to be impressed with: Boattest.com reviews the 50 Sports Motor Yacht